The Thai Chicken Curry on a Balmy Saturday Afternoon 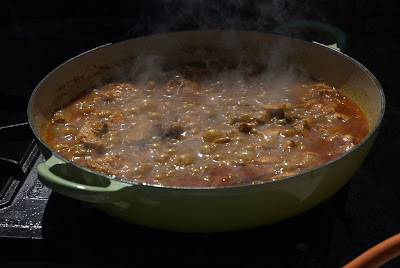 We had a yacht club social event on Saturday in the form of a “Cooking around the World” event. The day turned out to be one of those exquisite days for which Cape Town is so famous.

I decided on a Thai style chicken curry.

Most of my South African friends keep spicy food recipes in reserve for cold winter evenings and they live and cook accordingly. They hold that such food will warm you up. The opposite is actually true. The most of the spiciest food is found in the tropics. Just take a look at South Indian style cooking compared to the North Indian, Pakistani and Nepalese style cooking. In the South Indian style saffron would disappear completely in the heavy spices used in these dishes, while it appears regularly in the recipes from the colder regions.

The spices actually make you perspire a little more. Ladies, however, only develop a slight glow, I am told. Whatever you call it, all of it will cool the body down a tad. Hence the spiciness.
My dish tended more to the Northern Indian style to allow for the tender palates of my sailing friends. Actually, I rather like to cook a spicy dish that is not too hot, but flavourful. And here in the Western Cape you get the most amazing spices on your doorstep thanks to our Malaysian and Indian connections of old.

This dish was cooked in my enamelled cast iron casserole. This cookware will stay hot for a long time after you take it off the flame, thereby adding to the cooking time. The dish also rests better in the hotter environment, I like to think. Then you tend to get better flavour development. The pot may take a little while to warm up, but you get the heat back at the end. This is something everybody that has ever used a cast iron pot knows. The cast iron sides are also thick, adding heat from the sides, as opposed to some popular stainless steel cookware having thin sides.

This recipe, as always, gives an idea of what I did. The quantities will get you more or less to the same taste, but these recipes are never the same each time I cook them. Use chef's licence. The process is more important than the actual quantities. 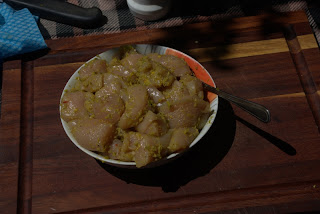 1 kg de-boned chicken. Any cut will do. I used breasts. Chopped into 2 cm cubes.
1 can coconut milk or cream. Or an envelope of coconut powder, which is what I used.
2 medium onions, chopped
½ sweet pepper, chopped. This is for some colour. Use a red or yellow one.
1½ dessert spoon green masala (Recipe here) 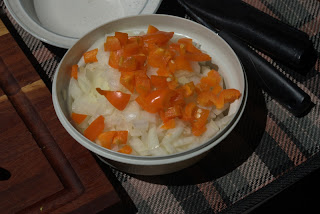 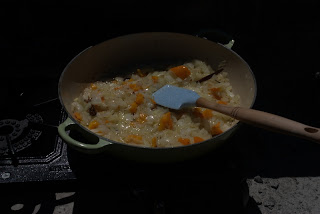 Marinate the chicken in the green masala paste for 20-30 minutes.Then start with a dry pan, pot or casserole. Heat the whole dry spices (not the aniseed, that’s for the rice) until the flavours start to come out. I normally crush the whole spices in a mortar and pestle to have some smaller bits. The flavour comes out better with smaller bits. Then add a dollop of oil. Add the onions and sweet pepper and fry these until they are translucent. Add the dry powder spices and fry until the flavours come out. Be wide awake that you don't burn anything at this stage, because then everything will be bitter and you will start from scratch. When the dry spices have married with the onion mix, add the marinated chicken cubes and fry them in the onion mix until they are nice and brown on the outside. They may turn only white because of the amount of fluid, but that is not something to worry about, Just keep on frying them till you think they are done. Not more than five minutes, though, otherwise the chicken dries out.

Add some oil during the frying if the pan gets too dry. The dry spices will soak up all the fluid. When the chicken looks done, add the stock and some water, set the heat to low and simmer the dish for 30 minutes or so. Test the chicken for tenderness and add some salt to taste at this stage. When the chicken is tender enough to your taste, add the coconut milk. I used powdered coconut, which I dissolved in one cup of water. Check the amount of water in your dish, that you do not end up with a flavourful chunky soup. You may need to use less water or take the lid off and allow the water to cook off naturally. The coconut milk will thicken the juices anyway, so watch out again for burning the dish. Add the chopped coriander leaves and the chopped chives, along with the garum masala. Bring to the boil, stir through and switch off the heat. Allow this dish to rest for twenty minutes. I rested the dish for the time it took to cook the rice. You can rest it for longer, the flavours keep on developing.

For the rice I used a lot of water and some salt. Cook the rice until it is almost done. The water will look milky from the starch. Wash the rice in cold water until the water is clear. Pour off most of the cold water and bring the pot to the boil again. Add the aniseed seeds and some salt to taste. Allow the rice to steam a little, then take it off the heat. You can reheat the main dish once you washed the rice. 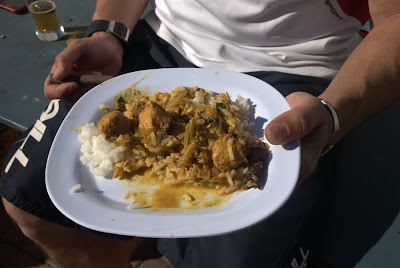 Allow everything to cool down a bit, then dish up.